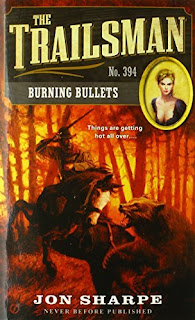 1861, the Flathead Lake country - where a tinderbox of hate ignited an inferno of violence.

Fargo is guiding a squad of horse troopers to Flathead country to check on homesteaders, when he comes across a pack of vicious varmints up from Texas causing no end of terror for the settlers.  And there's only one man who can take on the troublemakers: the Trailsman.

Nobody knows the character of Skye Fargo better than David Robbins (well, save for maybe series late creator Jon Messmann).  This is another outing from Robbins and does it even need a review?  Not really, but I'm going to give it one, anyway.  Yeah, it's another good one and it deserves a day in court.

The plot is simple: Skye is scouting for the military when he comes across a hillbilly clan from Tennessee living in the woods.  He befriends them and learns that an outlaw gang has been bothering them since their arrival.  Are the outlaws after the nubile females in the clan, or do they have another reason for rousting them?  Hmm...

The action is fast and furious in this story.  There's plenty of six-gun action, and chapters end with cliffhangers just begging you to continue.  It's a regular-size Trailsman book, but it's divided into 49 small chapters, which should lead you to finishing this book rather quickly.

There are two sexual interludes in the book, but you'll run through them fast to keep the action moving.  The one interesting thing about the T&A in this title is that one of the females, a hillbilly lass named Periwinkle, has set her eyes on Skye Fargo to become her husband.  She hounds him to no end, and threatens to oust their sexual tryst by announcing it to her family and thus becoming the wife of the Trailsman.  Does she succeed?  Of course not.  But it's fun watching Skye squirm like a worm on a fishhook as he attempts to pull out her claws.

I also have to mention the forest fire which engulfs (no pun intended) the final chapters of the book.  It makes for rather exciting reading as Skye goes about the chore of protecting the families and then having to search for the lost Periwinkle as the flames devour everything around them.  Skye and the poor girl nearly die in a close encounter with the inferno, and like everything else in this book, it'll keep you reading fast just to see what David Robbins has up his sleeve next for our hero.

Robbins effectively ends the book with Skye emerging as the hero (naturally) and on the verge of bedding yet another beauty.  It's the perfect closure to this volume, and simply left me wanting to read more in this series.  I think it'll have the same effect on you.  Yes, Robbins is that darned good, and Skye Fargo is in capable hands when he's on the keys.

The only drawback I have to this story - and it's a small one - is that we don't see any of the Flathead creature in action.  Skye briefly mentions it towards the beginning of the title, and it makes an extremely rare appearance towards the end, but it never truly emerges.  Robbins is also great with injecting a bit of horror into his work, and I thought we'd see this monster rear its head.  But, alas...  Again, it's only a little complaint and did nothing to upset my enjoyment of the story.

So, yes.  This book is HIGHLY RECOMMENDED.  David Robbins is in the saddle and Skye Fargo yet again rides mighty.  Check it out.  I seriously doubt you'll be disappointed.